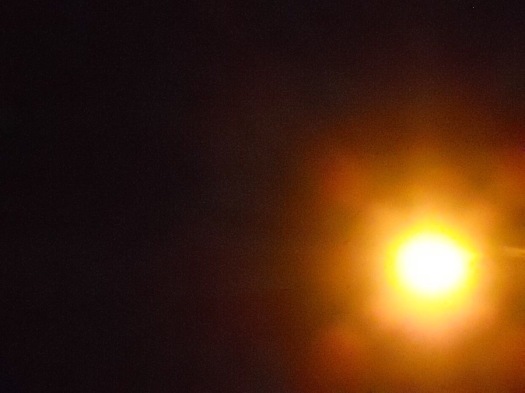 Most animals play in the day

in and out eye music’s

delirium or soldiering on

disrupting the perfection of

REM to death to wakeful

retreat and once again nightly

or daily if confusion creeps in

for good, for bad and neither

the way cycles are complete

and wobbly, perfect and broken 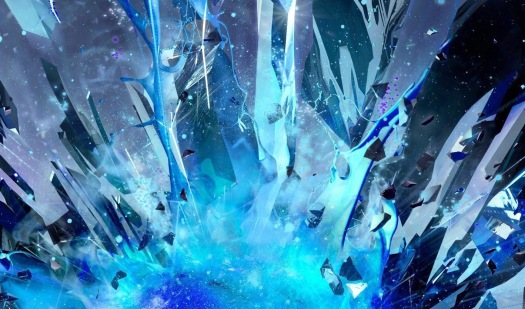 My readings have brought me these impressive quotations this week that emphasize keen observable presence in the art of creation, whether in relationships, literature, science or art:

“You need to get a long ways away from people before you can learn to listen properly.” Patrick Rothfuss, The Wise Man’s Fear.

“People want to weep. Pathos in the form of a narrative does not wear out.” Susan Sontag, Regarding the Pain of Others.

“Metaphor is a property of language that gives boundaries to worlds and helps scientists using real languages to push against these bounds.” Donna Jeanne Haraway, Crystal, Fabrics, and Field: Metaphors that Shape Embryos.

“Monet, a simple man with a child’s outlook on life, and no formal academic training, had seized upon a great truth about time before anyone else: An object must have duration besides three extensions in space. Monet did not write down any theories or express one as an equation; rather he illuminated this truth in the limpid colors of his silent images.” Leonard Shlain, Art & Physics: Parallel Visions in Space, Time, and Light.

A cello rests in a room, its neck snugged to the corner,

nearly facing the wall in neglect as if ashamed,

Never her fault, I never loved enough, not until late, too late.

I played for spans.

“You have long fingers; you’ll play the cello.”

I practiced and played: solo, ensemble and orchestra.

yielded no more than a B plus plus, merely a red ribbon.

But I scored Romberg’s cello sonata into my fingers for life.

And the taste, a hint of burning desire–first conquest, then mastery.

Until the mid-70s teen culture enwrapped me in smokey rock concerts and pubs,

And the cello lay low in my childhood home ’til California stole me.

She plays me time to time, decade to decade since then,

testing my resolve and desire, the want-it factor.

She breaks my every attempt, every dream of recapture,

having long ago mastered me. 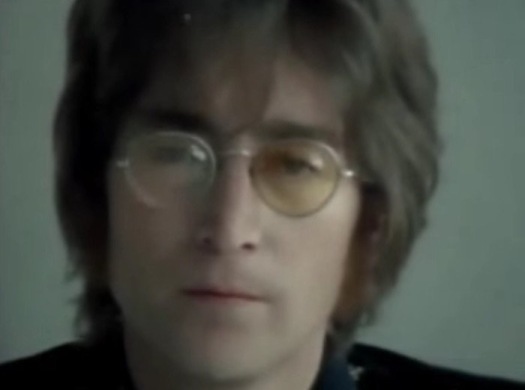 Pleasant read in Elephant Journal yesterday about the meaning of this iconic song that may surprise few but helps to remind us of something important in yet another age of crusades.

Like Heaven and Hell, countries exist only in our minds, yet we kill or die for them. Religion too is made up (imagined) by us—yet another institution that serves only to divide humans and prevent them from living life in peace. Neither are possessions real, except as a shared idea of ownership projected onto things, in turn producing yet more suffering as greed begets hunger.

When enough of us finally awaken to the fact that all of these things—religion, country, possessions—are nothing more than ideas in our minds, a world of unity, a brotherhood of man, with all the people sharing all the world, becomes possible. This may look like a dream, yet what is our current social reality but a collective delusion—a “reality” that only exists because enough people believe it? When enough “dreamers” actually see through the dream, a critical mass (what today we would call a “tipping point”) is reached “and the world live be as one.”

A simple Buddhist message to live within the reality we have, hard as it may be for many, this song also confirms the power of the imagination, whether for the highest of all achievements (Lennon’s song) or the most terrible (killing in the name of the deity of your choice). Imagine understanding and accepting the terrible beauty and destruction we create–as us. Simple and direct, less being more, the song is masterfully reiterating an ancient theme.

“No doubt,” you say, “that I prefer fantasy to reality. The lovers I adore are distant, physically and emotionally circumscribed by intimate unavailability. I love married or gay men or women most.”

I nod in agreement.

“I require so much space. Who is it that needs so much that is not there? Possibility is my lover, potential my partner. Otherwise, people bore as much as they excite. Those poles–like hot and cold, boredom and excitement–exist elsewhere too, you know, some other place and circumstance like thunder storms and endless sunny days, or the laughter and terror of loving daughters.”

I nod again and consider how I love my own.

ready to release and pour rain.

The storyline unfolds just then:

He had a girlfriend at the time.

Saigon had fallen two years prior.

So, his coming trailed calamity.

She walked the color of caress,

Her name, a chilly winter song,

she led him to the sun wingless.

And I watched behind a column

I constructed far too narrowly

to hide the heavy haunting me,

the girth of stony mind sleights.

peered around an Ionic pillar thin,

to gaze on a gazer, distant-drawn

His eyes pierced her silken skin

And there he knelt, nose in the air

sensing the suck of the sea’s loss

and so it begins, drops descending,

disrupting imagery as I trace them,

all ten of them mustered in distress

great blustery burst of all but naught.

for inspiration and steely wit to spin

commercial cogs of nil to the world.

It is easy to be anti.

then find the furthest pole—

the apogee to the perigee,

and clothe yourself in it,

and fight, live and die for the right to be it–

seated somewhere in between,

but somewhere along the imaginary stitching

that traces the path from me to you.

Not compromise but creation. 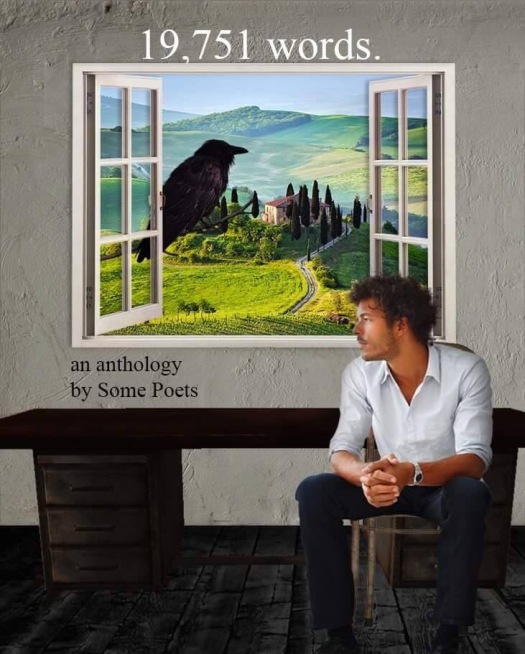 Yep, it’s been a work in progress for several months. What started as a fun sort of idea tossed around by members of a splinter group from last April’s Poetry Marathon, developed into a full fledged complete work of passion of …you guessed it, some poets. I am proud to call myself one of those poets.

This collection of Poetry Marathon survivors’ poetry is not only an ecclectic mix of perspectives and styles but also a visually stunning display of photography and art talent. My humble contributions to the published work have appeared here on this blog, but the poems’ textures change just a little when dressed up in a professional compilation nested among so many other talents.

My gratitude cannot be measured for the work of the editors and all who brainstormed to get the thing off the floor and out the door. It’s no mean feat to get 50 some odd creative types to agree and collaborate with a single aim. There were casualties on the way. But those who persevered deserve to see their accomplishment come to fruition.

Look us up on Amazon. More specific links (and shameless plugs) to come. 🙂

I scrapped together a few writings I blogged over the year and produced this piece that was published yesterday.

Tripping on sounds, I hear birds outside my window, muffled, over the swish-throb of a heartbeat in my ears, a pulsing slightly alarming and soothing all the same. I also hear a dish clanking outside the closed door of my room, emanating from the kitchen where I imagine my mother is sitting, skeletal and serene in her wheelchair, gazing off through the filmy stare that inhabits her face now. The cataracts of her mind’s eye reaches some unknown space outside or inside her head that swirls and lulls the cerebral juices to twitching stillness, her jerking to and from that space in split-second recognition of a face, idea, song slice or voice. I imagine her waiting like the baby bird with beak wide open in anticipation of its mother’s nurturing tongue, depositing the meaty worm of egg or pear. She is spoon-fed…continue here.

A friend turned me on to the photos included in this exposé, so I looked into the photos’ back story briefly (busy researching plastic bag bans, somehow ironically related), and my research turned up little more than a Brazilian artist’s attempt at a simple message: wear a condom. 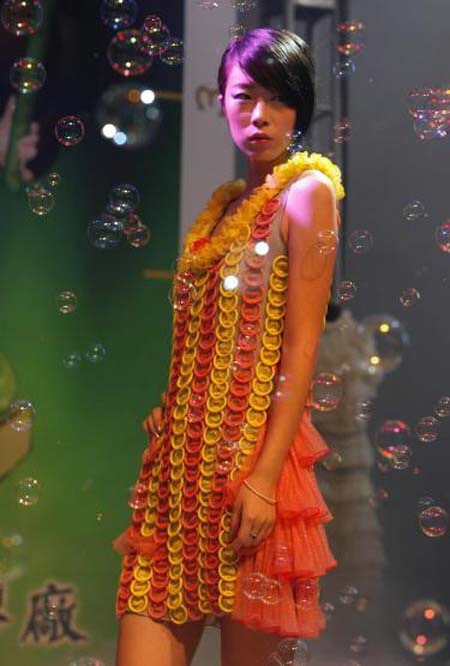 The more interesting story to me is always the imagined pinpoint moment when this artist had the lightbulb appear above his head and thought, “Hey, I think I will go buy ten thousand condoms and make a fashion line with them.” But really, the imaginative design and vibrant color and shape patterns are admirable, bespeak huge talent for this absolutely stunning line–and not as mere novelty.

I just cannot fathom how condom rubber breathes, however. Those condom-clad models (even scantily) sweating loads under the hot lights of the runway may have less appreciated the clever creativity.

Am I overthinking this?