I live under your gaze

by the bus bench

not a glance my way,

I feel your shame.

You’ll find it in my eyes.

It wasn’t easy telling her how I felt used and taken for granted,

all the while fighting self-judgment for sounding needy and guilting.

Do I tell her how I feel, even though there’s nothing she can do about it,

especially knowing that she will feel she has to do something about it?

Do I just silently accept our condition–she not relating to me, not

to reach her, make her happy, engaged and connected?

She needs my money, advice and time.

She needs my permission, approval and signature.

I pay for whatever she wants and requires.

I take her where she must go, pace the sidelines and cheer her on,

encourage her, give her feedback and teach her how to live now and beyond us.

We make each other laugh and share sharp wit and sardonic smiles.

She seems appreciative for us, for all we are and do.

No one writes a more heartfelt loving, grateful text.

I don’t doubt her love, she not mine either, I hope.

each with our silent confusion, angst and helplessness, resentment perhaps.

If she could only speak her mind.

Is it bullying to speak mine, a unilateral outpouring inevitably producing reactive

toxic anxiety or worse yet, guilt?

If she would shout, complain and demand, I would know what to do.

But quiet responsibility-assuming aimed at relieving me burden, one fewer needy time-taker,

No one wins, even when we’re not vying for an upper hand or competing in a contest.

As our relationship gestates, becomes what it will be for years to come, then changes

again, waiting, speaking and abstaining are the hardest parts.

Just one more of the many skills, mothering this one, I may never master. 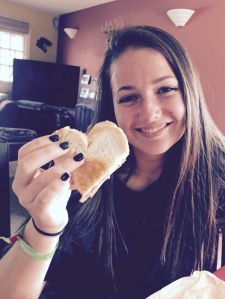 In today’s The Mindful Word appears this personal essay about guilt, obligation and giving, something I started to think about over the week and completed to publication.

When are we merely “giving to get something” as Joni Mitchell sings in “People’s Party”?

At 55, those delightful yoga sessions that instantly feel delicious deep down in the sinews and muscles, triggering pleasure sensors in the brain, are farther and fewer in between, even in a daily practice. Most days that great good feeling opens up only after slow beginnings, working steadily into full-throttle fluidity and warmth. I treasure those moments of recognizing deep physiological release and mental liberation. My mind soars with my body’s surrender to more, deeper, and longer stretches, everything opening, including …

Cheating: a lot of people do it, but hardly anyone talks about it.

Now, thanks to Whisper — a free online app where people anonymously share secrets — we have a little more insight into an otherwise private situation.

That is what I read in The Huffington Post the other morning while poking around the Internet. Apparently this anonymous confessing site is not the only one either. This idea has been around for a while on postsecret.com, which asks its participants to send in postcards with secrets–so I learned from my girlfriend.

Now what could be the benefit of an anonymous confessional app or space? I know the power of confession is great, a purging, and the anonymity allows for the confession, but how does that change anything for the confessor, the voyeurs looking on, or the couple? I can understand the voyeur part, as misery loves company is not a cliche for nothing, and perhaps the redeeming factor for such a site is for those who peer into others’ lives not just for vicarious thrills but to shore themselves up to do something about their own cheating or their significant others’ like confront or confess to the real live partner.

But as for the cheater confessing, what does that do other than provide a momentary relief of built up pressure that comes with holding in a really big secret. Does it alleviate the guilt associated with the act by justifying that others have done so too? Does it allow someone to reduce the self-hatred that comes with the act by seeing that he/she is not alone or the only person who has ever cheated? I can see how some would benefit from such a site. But for the serial cheaters and sociopaths, this site may actually be a narcissist’s delight; look at my exploits.

I believe the real need for confession comes in not merely commiseration but in communication and validation. If one carries a dark shameful secret, it works the mind of the carrier into shame and guilt, distorted thoughts of proportions from “I’m a bad person “to “no one has been as evil as I am.” If someone on either end of the scale confesses the secret and the hearer does not run away or burn up in the hearing, or the confessor does not explode, then the test of validation has occurred. He or she thinks in relief, “I said this terrible admission but the other is still looking at me as if I were a human being. Or, maybe, even sympathy or empathy.”

Human beings need continual confirmation that they/we are all together in being human. It’s lonely living in your own skin. There is no perspective, no context sometimes. The human egocentric being will distort the degree of horribleness of his crime or sin commensurate to how he feels about what he risks losing in having done that shameful deed: dignity, moral standing, trust, stature, jobs, friends, lovers, spouse and/or kids. For marital strayers, the need for confession depends upon that experience of projected loss and degree of guilt, whether religiously or secularly framed.

Confession as therapy has a long history from Freud’s “talking cure” and later Jung’s stages of wellness. Jung believed confession was integral to therapy and was one of the specific steps to recovering wellbeing. Others, philosophers like Michel Foucault, saw the confession as an institutionalized demand by society’s officials, the confession recipients. Whether criminal, medical, psychological or religious, confession is an extraction of personal details for the purposes befitting the one with greater power, the confessor’s hearer, i.e., police, doctors, and priests, according to Foucault. By the act of confession, one person is dependent upon the other for the hearing, the pardon, the judgment or non-judgment as the case may be, the punishment. One of the two-party configuration is in a position of power and the other is spotlighted in the gaze of the other, awaiting her fate.

When it comes to ‘straying’ spouses, should the offender confess to his or her partner? The answer to that question will vary according to the agenda or, not so cynically, the orientation of the advisor. Religious advisors may consider the moral character and state of the soul of the offender as paramount, whereas a psychologist may consider the long and short term damage to either or both spouses and the marriage itself.

In the small sampling of articles I perused on the subject from marriagehelper.com, psychologytoday.com, time.com and spiritualityhealth.com, the answer seems to be: it depends. Only one of the aforementioned seems intransigently prescriptive: in other words, here is what you have to do to make this work, regardless of the circumstances. The other articles weighed the grave injury to the non-offending spouse against the need for honesty and seeking for forgiveness of the offending spouse.

Some argued that it may be best not to tell for the irrevocable injury it would cause to the innocent spouse (I use these terms bluntly and descriptively only) not only in context of the marriage, which may well break up, but future going for the next relationship he or she enters, trusting issues, for example. Others advocate risking the injury and the probable breakup for the power and virtue in honesty and the contrition with which the honesty is given. Most agree that each case is different, which makes sense since each couple is comprised of specific individuals, not a common class of people.

Confession in itself is a rich source of contemplation, its ubiquity (Isn’t all social media confession?), its therapeutical properties and ritualistic sedimentation in cultures throughout the world, as well as its artistic value. One of my favorite poets, Sylvia Plath, harkens from what has been termed the Confessional Poets of the 50s and 60s, along with Robert Lowell and Anne Sexton, characterized by very personal subject matter such as domesticity, relationships and sexuality: novel for its time but pretty old hat now. Who doesn’t write the personal?

To delve in more deeply and expansively, I consulted the Encyclopedia of Psychology and Religion and found an interesting morsel in an abstract of an article by Morgan Stebbins titled “Confession”:

The act of confession either begins a process of reparation or affirms the subject’s relationship with the transpersonal. That is, one can confess wrongdoing or confess one’s faith. In most religious traditions, the former is accomplished through ritualized admission, absolution, and repair, while psychologically it begins the formation of therapeutic trust and unburdens the subject of poisonous secrets….The word confess is made up of the Latin com (together) and fateri (to acknowledge), indicating that a process of change begins both with another person and by admitting that which is in error.

Getting back to C.G. Jung, in The Journal of Religion and Health, Elizabeth Todd in “The Value of Confession and Forgiveness According to Jung” describes confession according to Freud’s successor, as one of need by virtue of being human:

Man, a naturally religious being, has a need to confess his wrong and to gain forgiveness of one sanctioned to absolve. The curative effect of confession has been known for centuries. Without confession, man remains in moral isolation. Priests, ministers, and rabbis, as well as psychotherapists, attest to the universality of this human phenomenon. Confession is located in that place where psychology and religion meet-guilt. Jung’s views on confession bridge the chasm between psychology and religion.

Confession is relationship by its very nature. One confesses to an other, human or deity/spirit. Implicit in someone unburdening a wrong committed against the hearer is the hearer’s consequent carrying that burden; confession is a complex configuration of moral, ethical, and personal obligations and considerations of fairness, rights and compassion.

Does one who cheats have the right to feel better by unloading the gnawing secret on the one on whom he cheated or is he nobler to suffer quietly the burden of that dark knowledge and guilt so as to keep the other unharmed? If morality and personal integrity is the sole consideration, then isn’t the secret holder/strayer obligated to be honest regardless of the consequences for the ultimately highest purpose of integrity and rebuilding trust, i.e., if I confess the impossibly difficult, I show you I am capable of being honest going forward? What role does the other play as mere listener, forgiver and rebuker? Is honesty always the best policy? Your thoughts?