A year ago today, I committed to daily blog posting to see if I could do it, after starting this blog six months earlier and then neglecting it. My aim then was to begin a discipline of daily writing, some place where I could be held accountable to produce writing, not mere scribblings.

The practice was more for me than an audience, but the practice evolved, I have evolved–teeny bit, anyhow–and I believe it is time (way past time) to thank those who follow, read, contribute and/or comment. It feels like a collaborative work, which is far more satisfying and meaningful.

If I had more time, I would do this better, offer more, not just content but more. I would learn to blog better to embrace you, my readers, in a more compelling and inviting way, make you feel at home, not like voyeurs. But there is still time to improve, thankfully. 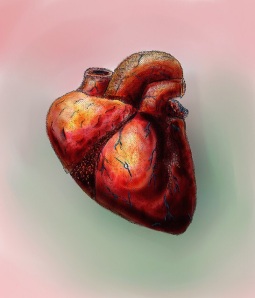 I have no idea which researchers substantiate the science in this article, which I have copied in its entirety because it is short and contains a poem by Pablo Neruda, a personal favorite, but I sure love the idea.

By now, most of us have heard the news: grateful people are happier, healthier and generally more fulfilled.

And while these are all really great side effects of gratitude, for me, one of the coolest things about gratitude is the way it affects the heart. The heart creates an electromagnetic field that expands up to five feet from the body. Its electrical field is 60 times stronger in amplitude than that of the brain.

Studies show that when people cultivate positive feelings, the heart’s frequency changes and its waves become smoother and more consistent, while anxiety or stress caused waves to be shorter and less organized. Though most positive feelings were capable of affecting the heart in this way, researchers noted that gratitude changed the heart’s rhythm more easily and faster than any of the others.

What’s more is that this frequency can even “entrain” hearts and brains nearby. It’s especially likely that the heart with smoothest, most “coherent” frequency will be the heart that other people sync up with. So if you’re cultivating gratitude, it’s probable that you’re changing the feeling state of those around you for the better too.

Basically, even when we aren’t aware of it, our heart is constantly communicating with those around us. But as complex as it all may seem, intuitively, it seems that humans have been aware of this chatting between hearts for quite some time.

It may be the reason we say we’re having a “heart to heart” with someone when we’re engaged in an intimate, sincere conversation.

Researchers have reported that hearts between lovers sync even when the lovers aren’t touching or conversing. The same goes for heart frequencies of unborn babies and their mothers.

So when Jim Rohn said, “You’re the average of the 5 people you spend the most time with,” he made an interesting point indeed. Our bodies are talking. And physiologically, it’s gratitude whose message is the loudest. We’re affecting each other in ways we may have never even pondered.

Choose your company wisely, but find comfort in the idea that gratitude has a way of trumping all. Keep gratitude flowing in your own heart, and you can change the world around you without lifting a finger.

Ode to Thanks
by Pablo Neruda

Thanks to the word that says thanks!
Thanks to thanks,
word
that melts
iron and snow!
The world is a threatening place
until
thanks
makes the rounds
from one pair of lips to another,
soft as a bright
feather
and sweet as a petal of sugar,
filling the mouth with its sound
or else a mumbled
whisper.
Life becomes human again:
it’s no longer an open window.
A bit of brightness
strikes into the forest,
and we can sing again beneath the leaves.
Thanks, you’re the medicine we take
to save us from
the bite of scorn.
Your light brightens the altar of harshness.
Or maybe
a tapestry
known
to far distant peoples.
Travelers
fan out
into the wilds,
and in the jungle
of strangers,
merci
rings out
while the hustling train
changes countries,
sweeping away borders,
then spasibo
clinging to pointy
volcanoes, to fire and freezing cold,
or danke, yes! and gracias, and
the world turns into a table:
a single word has wiped it clean,
plates and glasses gleam,
silverware tinkles,
and the tablecloth is as broad as a plain.
Thank you, thanks,
for going out and returning,
for rising up
and settling down.
We know, thanks,
that you don’t fill every space-
you’re only a word-
but
where your little petal
appears
the daggers of pride take cover,
and there’s a penny’s worth of smiles.

Like writing, gratitude is a daily practice that does indeed deserve the day’s recognition and honoring. On this day of thanks, I express my gratitude to all who have contributed to, collaborated on and visited this blog. Peace.

See you over there. Thanks, Mom, for taking her with you❤ #lovehurts #unconditionallove❤️ #dogslife #peaceful #rip