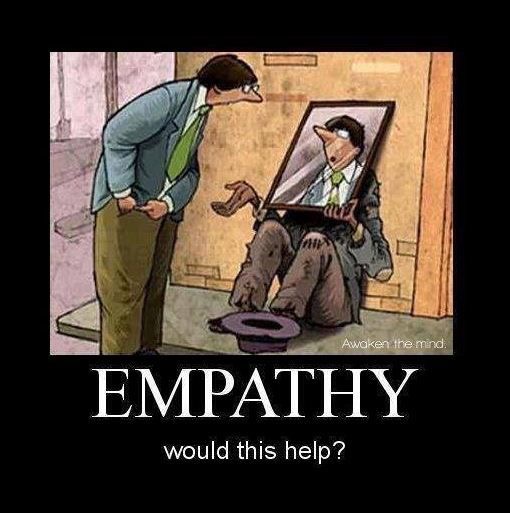 I enjoyed this short from Collective Evolution featured in a Psychology Today article in April, 2014, on the difference between empathy and sympathy and so share it with readers today.

While most of us know the meaning of the two words and do not need an animated short to teach us, a subtle reminder about the power placement inherent in these two terms is beautifully and simply elucidated in this short.

The two terms have always been distinguished in my mind by power. The position of the giver and receiver of sympathy as opposed to empathy is quite different. I picture it as a gazing down at another versus a locking eyes with another.

Sympathy is synonymous to pity. Pity describes an emotion derived from a feeling of superiority, even though the intention of the pitier is to give relief and express care. More often than not, however, the pitied is treated as an object, one that makes another compelled to react as if the object of pity was drawing something from the onlooker. A person who suffers from whatever misfortune of accident or fate or foolishness, is, while in the throes of such misfortune, viewed as less than in some way, less than the one who is not suffering misfortune. The sympathizer distances him or herself from the misfortune and offers sympathy to the other, possibly feeling uncomfortable with the reminder of everyone’s vulnerability to life’s unexpected or expected cruelties.

My associations with the two words is not dispositive, however. Oxford Dictionaries defines sympathy as:

1Feelings of pity and sorrow for someone else’s misfortune:
they had great sympathy for the flood victims

SYNONYMS
1.1 (one’s sympathies) The formal expression of pity or sorrow for someone else’s misfortune; condolences:

2Understanding between people; common feeling:
the special sympathy between the two boys was obvious to all

The ability to understand and share the feelings of another.

These two definitions are not very enlightening because the terms are defined equivalently; the Urban Dictionary is clearer as to empathy:

Empathy
1. The ability to identify with and understand somebody else’s feelings or difficulties.

2. The transfer of somebody’s own feelings and emotions to an object such as a painting.

Where Oxford fails, Urban prevails. The clear distinction between the two terms is power–sympathizers judge:

sympathy
Sympathy differs from empathy in the following ways:

With sympathy, the helper:

Helps within his/her comfort zone
Makes a cursory judgment of the person’s needs
Often will get upset when it is explicitly revealed that their help is misguided or unwelcome (after a long buildup)
May feel as if he or she is the ‘mentor’, or the ‘superior’

With empathy, the helper:

Relates to the person on a personal basis
Forms a deep emotional bond with the person on many levels
Learns to see the situation from the person’s perspective
Sees the person more as an equal, and ‘walks in their shoes’.

The two should not be confused. More often than not, sympathy is the form of ‘caring’ that is given to those in need, and can be quite misguided, especially in dire situations that most are not used to dealing with. Most therapists, teachers, and unfortunately parents will often give this kind of ‘help’ to a troubled or very upset person. However, if they were willing to step outside their comfort zones, they could learn how to relate effectively.

The two terms should not be conflated as each embodies not only a different emotion but different disposition all together. The importance of understanding the stance “the helper” takes may help the helper to understand what she is trying to do and what she is actually doing. In other words, by feeling someone else’s pain and not trying to solve it, the empathizer puts herself into the other’s skin, stands eye to eye with the one in need of empathy, and not above or at a distance. The subject-object relationship is extinguished, at least in that empathic moment.

Brene Brown in the short RSA talk and article referenced above, outlines the key features of empathy as the ability to see from behind someone else’s eyeballs, to be non-judgmental and to communicate knowledge of the person’s plight by reiterating her position back to her or encouraging the other to speak about it. It takes putting one’s own agenda and feelings aside–and lots of practice, daily.

3 Replies to “The Power of Empathy”