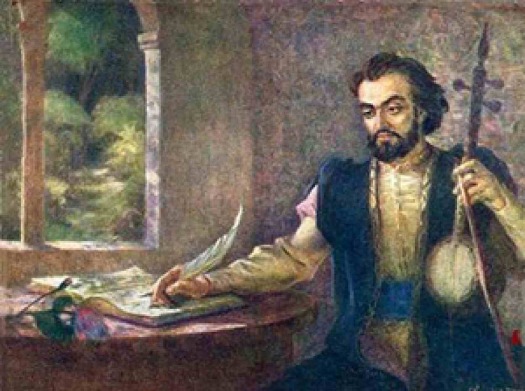 Sayat Nova is an Armenian-Georgian 18th Century poet and musician whose creativity abounded as seen through a short portrayal of his life’s work as poet, musician and troubadour, and according to the scant information I found in lightly researching his name. His life’s work/biography apparently is not readily accessible to American culture judging by the comments to this Youtube slice of the larger 1968 work entitled The Color of Pomegranates, a film depicting the poet’s life, in a stream of consciousness that appears more like a series of still life shots, courtesy of Russian director Sergei Paradjanov.

Admittedly ignorant of the poet’s work other than the short film on Youtube and a shallow delving into Internet write ups on Amazon, Wikipedia and Youtube, I am fascinated by this clip for its sheer intensity of suggestion and superb acting. Only vaguely familiar with folkloric representation through symbol, I can see just the glaringly obvious like the mechanically spinning Cupid, the overt machinations of demonstration of love, purity or wisdom (white flower over the man’s face), the book (probably references to the poet’s writings) and projections of desire.

My uninformed interpretation (and I am loathe to do more research until I have fully delved into and purged my initial uninformed impression) is the immediate interplay of the male and female characters, one as object of adoration–the woman–and the man’s supplications to her with his offerings, but concomitantly, the other–male–as the projected object of desire. The words, “I search for treasure, something a little bigger or greater” (my rough translation from the subtitled Italian) are the only lines overlaid by the flashes of stills of faces and seemingly incoherent actions of winding, circling and supplicating.

The words evoke a lack of fulfillment, a seeking of something valuable, perhaps in another human being or in life generally. Thus, the book, flower and other artifacts, including earth are thrown before the seeker as demonstrations or offerings. I thought of how we seek something more in our relationships, especially long term relationships, due to boredom or the temptation of forbidden fruit or the need to fill a hole inside of us that cannot be filled with another human being or things. Perhaps the search is for spiritual fulfillment.

The final act of this clip (from the larger movie) is the holding up of the ring by each, another circle and symbol of marriage or betrothal of some sort, whether to each other or to some idea. So, it seems that all of the communication between male and female actors, is a kind of courting with the male trying to figure out what floats her boat, what will make her heart turn to him, both being so taciturn and severe in expression. The flatness of character isolates the ideas from the personalities/characters, which effectively underscores love, connection and the projection of desire on to the other.

I particularly like the mechanical production reminding me that sometimes courting and relationships–or searching in general–can be a mechanical application of relating, manipulating, knowing what makes another tick, what moves the other to come to love, another human being. Being in the gaze of the other produces fantasy and desire as the object of the gaze becomes the screen of another’s projections of what she wants to see based on her needs and wants.

Before I spoil my initial impression with reading more qualified opinions on this clip, the movie, the poetry and life of the creators of the words and film, I wanted to share this piece, raw and untainted by more informed parsing of the presentation, which I enjoyed tremendously in its peculiarly stylized overly dramatic presentation reminding me of the Kabuki theater of the Japanese.

This five minute clip is worth a few spins to get over the initial offputting oddity and appreciate the artistry of the production. Happy Sunday. Namaste.