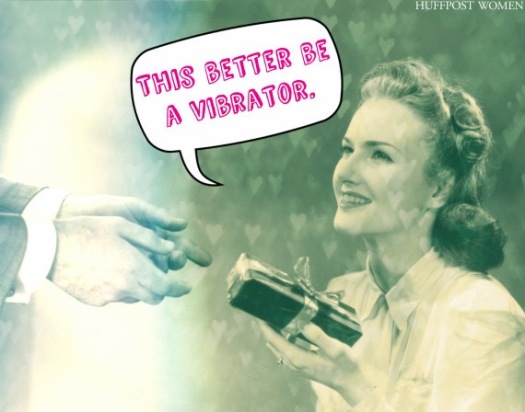 ﻿
credit:  http://www.huffingtonpost.com
What I treasure most about blogging is the many contributions from readers whether in thoughtful or supportive comments, or suggestions of what to “gaze” at as today’s content donor put it. It makes my day when someone sends me a bit, a piece, an image, video or an article, some snippet topical to the blog’s thematic interests. Today’s gift is an article in the New York Times paying tribute to Dell Williams, former actress, advertising executive and army WAC, who started Eve’s Garden, a Manhattan sex boutique opened at a time when openly flaunting female sexuality took some daring.
The story goes that she opened her sex shop after a humiliating experience at the hands of a young “pimply faced” clerk/interrogator when, in 1974, she purchased a vibrator. This spurred her mission to establish a place where women could purchase sex paraphernalia in peace. This kick-ass entrepreneur spent a majority of her life defending the right to open acceptance of women’s sexuality, something perhaps taken for granted today as more of a given than in her lifespan.
Though it is still not a given even today.
While attitudes about female sexuality have progressed from denial by the patriarchal societies of Western Civilization to acknowledgment that it exists, there is still some distance to go before female sexuality is fully, openly celebrated, let alone discussed, by men and women.
Thanks to vibrators, and women like Dell Williams who fought for freer access to them, there is an interesting history from which to start a conversation about women’s sexuality that does not seem so contrived, cliché or awkward. In fact, I used today’s research to pique the interest of my 15 year old, a sly engagement of her unsuspecting provincial sensibilities, to talk about sex, something she is loathe to do with her mother.
It turns out the vibrator is the tool that has not only traveled well through the centuries but also one that has propelled female sexuality and feminism into its current state of the question I have heard of late: Do we even need feminism any more? While the answer is yes, for many reasons, economic equality access being only one of them, that is a story for another day. The advent of the vibrator is a story of patriarchy, capitalism and power.
It begins with Hippocrates in 4th Century Greece, or at least he was the first on record to theorize that hysteria, a condition ascribed to women who displayed symptoms such as fainting, nervousness, and bad temper, more commonly known as “dry womb disease,” which seems to me as overall unhappiness most probably due to a lack of sexual excitement (read: not pumping out the lube) or fulfillment with men and the “normative” practice of penis-penetrating-vagina sex, what Rachel P. Maines in her book The Technology of Orgasm terms the “androcentric standard” of acceptable sexual practice.
The medical treatment Hippocrates and generations of physicians thereafter–until 1952 when hysteria was no longer diagnosed–for women experiencing hysteria and dry womb, was manual manipulation of the vulva by physicians to hysterical paroxysm, the medical condition better known as orgasm–in other words, getting women off. This treatment, an ongoing therapy, took up too much time for doctors to make enough money from other patients and was a routine and rote task that clearly could and should have been the work of midwives but for physicians not wanting to forego the income, prestige and power over the female body. As such, devices were developed to facilitate that “chore.”
Coupled with attitudes that women should not be touching their own bodies or have pleasure outside of marriage and what men could provide–androcentric sex–the vibrator was kept in the hands, so to speak, of the medical establishment until 1902 when Hamilton Beach patented the first take home vibrator, a large and noisy (we can heeeeaaaar you) apparatus. The hush of sexual repression quietly deposited these household objects from the hands of doctors into locked drawers, despite their popularity. According to trojanvibrations.com, these early vibrators emerged as one of the most common household electrical appliances invented even before the electric iron:

By 1917, there were more vibrators than toasters in American homes, claiming to cure everything from headaches to polio, deafness and impotence. Some ads for vibrators even claimed to be able to put a glow on your face.