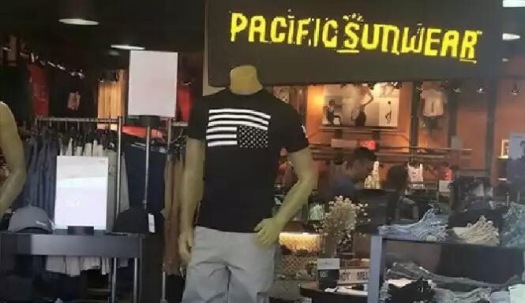 I am not fond of patriotic measurement. Those who denounce others for lack of patriotism are often too busy waving flags to find time to write their Congress people about the injustices around them: the disproportionate number of black youth in prisons, the war against the poor, and the cycling of drug addicts in prisons on the wheel of blind ineffective policies and inhumane disdain for the weak and poor, to name a few. The ignorants of history get my guts gurgling.

Peace-loving by nature, I do bite when rankled. My teeth sunk into an unsuspecting victim on Facebook (where else more appropriate?) on an ex-student’s thread after the post question asked why everyone was getting so riled up over PacSun’s new design: an upside down flag. The first responder raged about disrespect for the flag. I smelled that one coming.

Also inherently pedantic and boorish, I tried to positive spin the symbol as patriotic while teaching a history lesson about the founding fathers of our nation finding it so important to democracy that citizens of a nation DO speak up and out for what they believe are best policies and interests for the country, whether those sentiments are critical or supportive of existing ideas, policies and laws. However, the tepid response held that a positive critique helped more than a negative one.

She misses the point.

When PacSun disseminates t-shirts with upside down flags, it may be merely smart marketing to the rebel, the cool folk, the hipsters or youth generally, those with piss and vinegar in them about something–and not necessarily the country’s welfare. However, the symbol should evoke the ultimate patriotic act: expressing dissatisfaction with the nation’s behavior.

What could be more patriotic than to care about the nation enough to speak up? To want changes? Apathy or blind complicity wreaks destruction to a democracy grounded on a bustling marketplace of ideas.

How else do our nation’s law and policy makers know how to represent us if not for speaking out (yeah, I know…lobbyists, special interests and favors) at least in principle, on Constitutional constructs. Flag waving signals symbolic respect, approval and support of a nation, in whole or in part. Protests, letters to the district Congress person, flag burning and iconic imagery and slogans of dissent, such as upside down flags, literally and symbolically disapprove a nation in whole or in part.

Patriots of a nation act, speak and opine. Shallow patriots wait for holidays to post sentimental gestures, gratified that they have done their part. Traitors silence speech of others, censor opinions they disapprove, the very acts from which the founding fathers of this country sought to protect its citizens.

Plenty is upside down in America now. The downward facing flag speaks legions to me, one citizen among many who feel the same. Those who disagree speak freely in cafes on the streets, at the dinner table of their homes,  slouched at their desks on their electronic devices and behind the screens of anonymity on social media.

And that’s the beauty of it–the freedom to express disagreement, exchange ideas and learn something–in a nation that not only tolerates but requires it for its very existence.

On this Memorial Day, remember American history. The antidote to tyranny lies in the people–who are the sovereignty in this nation–assembling, whether in private or public, to meet with other minds in order to keep the government in compliance with the needs of its rulers–the people.

Power to the people, and their voices, echoing from the battle field groans of dying soldiers to the exclamation points typed on an IPad to punctuate a Facebook debate.