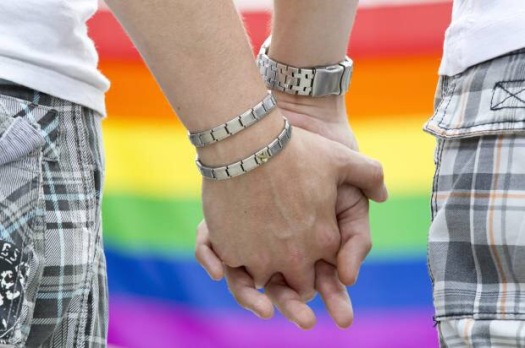 She told us, “They stop each other from killing each other by rub rub rubbing, until they come come come. And then have a banana together or something,” adding, “I think there’s a very positive and certainly very natural aspect to this.”

Despite this slightly offputting ending paragraph about rubbing-to-coming monkeys, I appreciated Salon’s broaching a risqué rather than sensationalized topic of real human behaviors that few, if any, in our still-so-homophobic culture here in the U.S. mention.

Of course, I’m a sucker for all things relationship-exploding. Not destructive eruptions, but exploding sedimented behaviors and expectations based on normativity, wether applicable to marital or sexual definitions, the kinds that clear the path to allowing a little reality to seep through.

Salon’s The “Bro Job”: Why “straight” men have sex with each other explores in an anthropology-light sort of way, the underpinnings of self-identifying heterosexual male sex with other men, reasons–if there need be–for its natural occurrence in what is for some, even many, an unnatural social order of human intimate relationships based on heterosexual monogamy.

Pointing out the diversity of male sexual appetite for meaningless as well as meaningful sex, the author explains how men sometimes want sex that is just…well, sex, not love-making or performance, just men enjoying what men do, for fun, release, something less demanding, I suppose, a more automatic, instinctual and non-committal release.

It makes sense to me. Men–and women–suffer under the continual obligation to try and understand another; sometimes the relief lies in just being what they are without apology.

Though the author is quick to point out that sexual politics and labeling are part of the problem too: so is a man who has sex with men and women automatically bisexual? Quickly jumping to labels is what others do to others to make themselves feel comfortable. But the label does not necessarily fit the identity of the labeled.

I recommend this quick and tactful read.