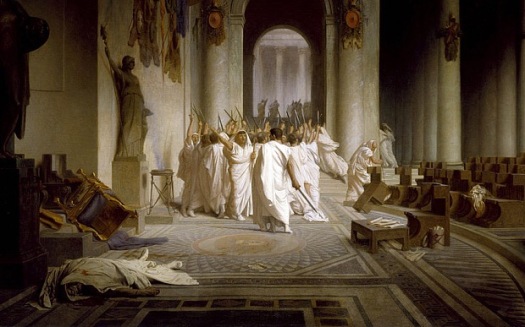 Who is it in the press that calls on me?

I hear a tongue shriller than all the music

Beware the ides of March.

What man is that?

A soothsayer bids you beware the ides of March.

Today is bad omen day, or “I told you so” day. Julius Caesare apparently was warned of the treachery that awaited him at the Senate–many times and ways–yet he remained in denial, denying even his own gut feeling that the nasty-liver-missing-heartless entrails of a dozen or more sacrificed beasts did not bode well.

According to UK’s The Telegraph, The Ides of March: The assassination of Julius Caesar and how it changed the world, Caesar was warned by an entrails reader that ill fortune awaited him. According to this account, Caesar actually died with an unopened scroll in his hands, given to him by a messenger warning him of the treachery. But nooooo, he had to go to show good appearances, at the beckoning of his so-called friends and countrymen.

For drama’s sake, Shakespeare spiced up Caesar’s departure with parting words, “Et tu, Brute?” and anyone who knows anything popularly about Caesar’s death, probably knows it through Shakespeare’s play, required reading in many high schools and undergraduate college courses.

In the English-speaking world, we know a slightly different story, thanks to Shakespeare. He lifted Caesar’s dramatic dying words, “Et tu, Brute?” from an earlier play by Richard Edes, and made them a part of the assassination mythology. In reality, most Roman writers state that Caesar said nothing, but merely pulled his toga up over his face. They do note, however, that some people were spreading the story that Caesar had gasped, “καὶ σὺ, τέκνον?/You too, my child?” to Brutus. (Many Romans of all classes were bilingual, with the more educated frequently preferring to speak Greek.)

Most famously, however, Shakespeare does away with Spurinna, the venerable entrails-gazer, and instead invents a soothsayer in a crowd, who shouts the famous prophetic warning to Caesar, “Beware the Ides of March!” It is, perhaps, one of Shakespeare’s most famous lines and, as a direct result, “the Ides” has come to mean a date of doom.

Doomsday. I hope not. My father has a doctor’s appointment today in preparation for surgery. The innards of my breakfast cereal looked okay this morning, however. I think it’ll be all right.

My girl hunkering down after 3 heart attacks in 2 days, brought back to life by cpr. She's weary. We say our goodbyes to Kiah at night just in case. She chose us over 11 years ago as we were a rescue family that needed her. ❤🙏 #puppyhearts #furbaby #puppylove