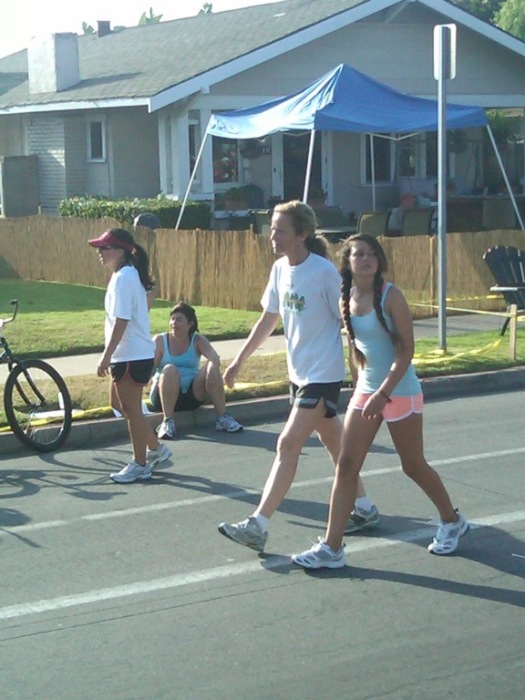 Facebook reminds me that I have a memory from five years ago, a picture of my then 12 year old daughter in braids and new-budding body and me, lean and less harried (the intervening five years ran roughshod over my face and spirit), walking a 4th of July 5k that is an annual staple of my town, that and the parade that follows. A rare photo in that my younger daughter awoke early to participate in this event with me. She has seen me run all of her life, even gone with me via stroller or bicycle. Running and soccer predominated over our home all of her life.

Except my daughter, a soccer player since a toddler following in her older sister’s footsteps, literally, has never enjoyed running. In fact, her particular style of soccer reveals a constant strategy to minimize sprints and chases. She outsmarts rather than outruns. So, this particular photo reveals the rare and typical: the two of us in an early morning race–walking.

I remember this day vividly. She and I raced to the race, having awakened late. By the time we reached the starting line, the race had begun and we raced along in the throngs of sneakered early-morning celebrators. We ran our race before it began, a well-known mistake for one who had run dozens of prior races, short and long. Pacing. We had not paced ourselves, so the photo captures us walking at the three-quarters mark, me with serious intent and recovery written on my expression and she with discovery and rescue broadcast on hers. We were enjoying the moment of breath and notice, me ever deep inside myself and she with wonder of the street lined masses outside.

The friend who took the picture much to my surprise traveled in a group tour with me to the Costa Rican Carribbean rain forest jungle on a yoga retreat. We became waterfall hiking companions as well as yoga classmates on the trip and afterward at the health club we both attended. I did not know he had taken the picture until he posted it on my wall. That memory and all it blankets coupled with a coffee quiet morning foreshadows a lovely 4th.

Happy, peaceful revolutions to you all.