L’Aude is a river that houses three main regions here down south, Salelles d’Aude being one of them along the canals in the South of France. The canals are one of Napoleon’s bright ideas for moving trade through the southern country. That big idea and expanding Paris boulevards and thoroughfares wide and far-reaching were revolutionary, practical and enduring.

Today, after last minute shopping in a quiet mall outside downtown Narbonne, some to-go sushi from the supermarché, and an espresso in the cafe by the mall exit, we ventured to a small hamlet close to Salelles called le Somail, one of the three divisions resting on the Aude. The sleepy port town boasts a tea house and ancient book store, the former closed for Christmas and the latter open for our roaming eyes and feet. Much of the tiny town is closed for winter.

The ancient musty chill air inside the book store reminded us of winters, many of them passed through, wind and rain soaking the stone walls of this tiny librairie tucked alongside the river of moored houseboats, cacophonous ducks and romping dogs–just before the stone bridge. The cool wind hurried our leisurely walk. 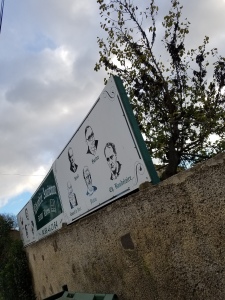 The town, abandoned by tourists and inhabitants alike, stood as contrast to bustling downtown Narbonne with its courtyard restaurants a-brew with ale and crepes, narrow boutique-lined lanes, stately cathedrale de Narbonne, and street music. We spent a fine-weather, blue-skied day sightseeing, shopping and eating crepes, croque monsieur, and macarons along the outside booths and stands of the market. Inside the farmer’s market, we crammed all five of us into a tiny tapas bistro of four long bar tables, where we ate duck and scallop brochettes, planchas drenched in olive oil and garlic, and grilled aubergine and courgettes, washed down with local white wine for us and orangeina for the kids.

We are gaining weight in kilos but will be losing it in pounds when we return, so it should be easy. Right?