A solar system a vortex,
some believe so,
the sun sucking in
all in its range
in ever closing spirals.
That I am too, no matter,
a vortex with spirals,
children, pets, students,
parents, friends, strangers
and partners and lovers.
As my trajectory spans
the sky of my life,
I feel those close,
farther and further
ahead and behind.
I merge with them,
drag and spin them,
catapulting
their weight and shape
to bend to and for me.
I draw people powerfully
with my own pulse. 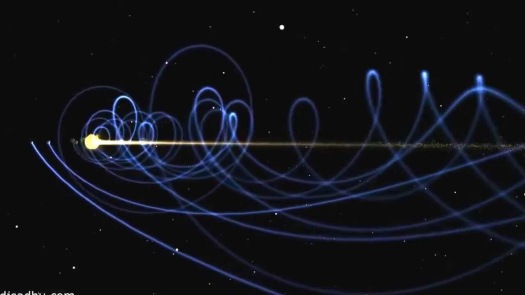 As I sometimes do, I asked my oldest daughter recently about her love interests, which appeared to be no one in particular, and as was almost always the case, she was noticeably uncomfortable with the question.

I am never sure when I ask her, that I should ask and what I should ask. My nearly nineteen year old has never been seen openly intimate with anyone thus far, though she clearly has interests to be so.

If I am honest with myself, I ask with more than mere conversational curiosity. It isn't quite concern, either. But as her mother, I want to know about her thoughts, feelings, interests and difficulties. As a budding adult human, however, she appears reluctant to share the complexity of her desires with me. Or maybe she can't articulate them and adopts a defensive posture.

However it is, I feel as uncomfortable asking her after I receive the response: "What are you trying to get from me, Mom?" Or often she will joke, "There's no one who has agreed to join the awkward club."

Yet, I know she goes out with friends, has a seemingly active social life with people of various overt and covert identities, as far as I can tell. Some are declaratively gay or lesbian. Others are more difficult to discern.

Once I asked her outright if she were in a relationship with a friend I knew to be a lesbian. After her usual overly joyous forced laugh, she steered the conversation to a more general discussion of sexual identity. Somewhere in the conversation, she declared she was pansexual.

I thought I knew what that term meant, but I wasn’t so sure she did. However, a sure way to kill the conversation was to get pedantic, probing definitions from her.

But I couldn’t help myself and asked her if she meant polyamory or pansexuality. After a blank look, she gave a decided, slow shake of the head in dismissal of me and the subject and moved on.

These morphing adults are so hard to get a handle on when they are your own offspring. I have better luck with college students I teach, though I never ask about their sexual or romantic orientation. Some offer it up unasked or wear it like a uniform, however.

After our neat little chat, I, of course, retired to my cave for some research on the topic that piqued my curiosity. There are so many terms to identify sexual and intimate orientations or inclinations that I get dizzy sometimes, despite my mastery of Greek and Latin prefixes.

The synthesis of my readings led me to believe that pansexuality is sexual openness for attraction to all gender/sexual identities: gay, lesbian, tran, cis, androgynous, to name a few off the top of an exhaustive list. Admittedly, I had to click the links to some labels.

Polyamory, as the word’s root suggests, is about loving multiply with open honesty (how else could you get away with multiple partners?). Loving is used broadly to encompass emotional intimacy and/or sexual intimacy.

What draws me often to this term–polyamory–is the notion of multiply loving that may or may not include sex. Intuitively and experientially, the idea resonates with me, especially when I reflect on all of the relationships of my life to date.

Long-distance relationships have been some of the most intense emotionally and romantically, perhaps due to the effort they require to maintain. In those, the physical to emotional calibration is far different from the daily relationship, though both are intense. The challenge of each–lack of physical touch vs. daily friction of minutia–hones different skills and underscores individual strengths and weaknesses.

I have far more patience for promise than reality, I find. Perhaps I am not much different from most in that regard–fantasy is so much more malleable than reality.

But this is why polyamory makes sense to me. I love so many people and each uniquely, which is reasonable given that each brings a specific set of attributes to a relationship. The combinations are endless in light of the global population.

I think we do largely operate polyamorously. At times, we love our girl friends or guy friends as much as or more than we love our chosen ones, our significant others. Why the term is not more widely adopted, however, is the underpinning of the term: honesty.

For all kinds of reasons, the least of which may be cultural, sociological, historical and/or biological, people around me cannot acknowledge they love to various degrees many people. It’s too threatening–to their security or sense of how things should be, as they always have been in the ways of love in monogamy.

And I am not knocking monogamous coupling as it has immeasurable benefits personally and communally. But monogamy may be not only unfit for some people as a lifestyle, but also unfit for any person at any given point along the timeline of his or her lifelong relationships.

We are a fluid people. We change, many of us. This does not suggest we are fickle or shallow lovers. It means we grow and shrink as we move through life. If we are honest, and that is not only critical but terribly challenging, we acknowledge our love and desire flux. If we are brave, we honor it and engage with others who are likewise brave enough to acknowledge it.

That takes continual checking in, open communication and honesty with self and others–a daily life practice.

So while pansexuality is a political term, in my mind, one that respects choice and a host of other attributes derivative of anatomy, biology and psychology, polyamory is the umbrella term of intimacy.

Pansexuality makes sense for my young daughter hell bent on railing against the evils of society, her youth the reason for her informed intimacy deficit.

Polyamory is not about having sex with lots of people. And the question of sexually transmitted diseases is encompassed by the honesty prerequisite. You cannot do polyamory without the honesty.

The choice and the identity is about loving people as we do, when we do and how we do–in our spanning days roaming the earth hunting and gathering, doing the business of living.

2 Replies to “What’s in a Name? Are you a polyamorous pansexual?”